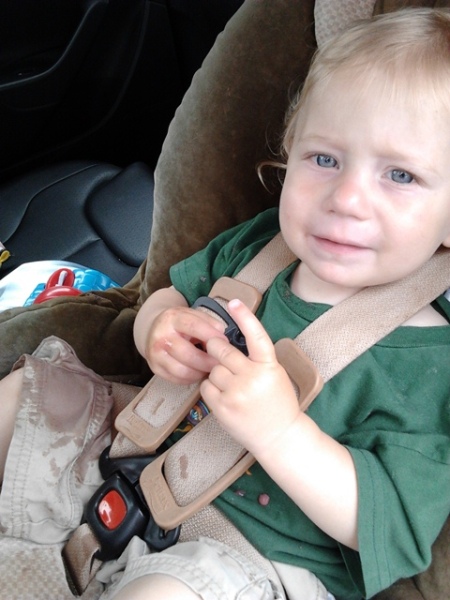 Hugo likes those organic squeeze fruit baby food things. He never ate baby food as a baby, but now he thinks these things are a cool snack. I usually get a few when they’re on sale for when I’m running errands at snack time.

He knows not to squeeze them! Or else I would never have trusted him with one on the 5 minute drive to Whole Foods this afternoon. My only clue that something was amiss was the cryptic comment “Hummus” from the back seat. (Now I wonder what he found analogous to hummus, the texture?)

I opened the rear car door quickly since it was raining lightly…to find pink squeeze fruit all over Hugo and the car seat. I had no baby wipes but did what I could with 6 travel tissues before snapping this picture. Looking pretty innocent, right? He must not have been hungry. 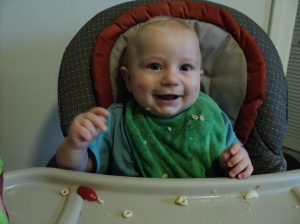 Happiness is a tray full of food

I wrote about Hugo’s introduction to solids through baby led weaning a couple of months ago. Since then, I have learned a lot as Mr. Go has grown and become accustomed to his two meals of solid food a day.

To recap, baby led weaning (BLW) means waiting until a baby is able to feed himself (around six months) to introduce solids, then just presenting healthy food and allowing him to eat it or not. No purees or cajoling the little one to eat. Food is offered in large enough pieces for a baby to pick up and gnaw on.

There have been quite a few surprises along the way. First of all, Hugo didn’t seem to know that “food before one is just for fun.” I had read on BLW boards that babies just play around with food for the first few months and may not start really eating until 9 or 10 months – or even over a year old. But just a couple of days in, I offered Hugo some pears and he ate them all.

Many times, Hugo would appear to have eaten all of his food, only to have it appear crammed between his thighs and the side of the high chair when I removed his tray. He still does that now even though he’s a more skilled eater.

I found out that it’s not an old wives’ tale that babies sleep better on a full stomach. The first time he really ate avocados he slept a three hour stretch (which was quite long at the time). Just this past week, Mr. Go slept much longer than usual after eating three meals of solids that day.

I forgot to nurse him a half hour before meals a lot of the time in the beginning. It’s recommended to keep hungry babies who aren’t great at eating from getting frustrated by their inability to pick up and eat the food they’re presented. It’s also a subtle way to encourage breastfeeding while following baby’s lead to gradually wean. There was no reason to worry on that front – after Hugo initially reduced his breastfeeding requests, he’s been nursing every three hours for the past few weeks.

Another mistake – I gave Hugo blueberries and Cheerios the first week and he couldn’t pick up any of them. I felt terrible but he was a good sport about it. And now he can easily pick up morsels that small.

Prepackaged baby food is not the devil, and sometimes it’s cheaper than buying fresh produce. Advocates of BLW say that it eliminates the need to buy special food for your baby, as he can just join in family meals. That often doesn’t work for us because we either eat dinner after Hugo goes to bed, or have delicious, sodium-laden, over-processed food that Hugo is not allowed to eat.

I got some ready-to-eat purees for when we were away from home at meal time and it worked out well. We bought a bunch of jars of food before the hurricane. Hugo likes them spread on toast or a rice cake. He also likes when I let him feed himself with his little spoon.

Sharing food means it’s harder to deny him what I’m eating. Hugo had his first dessert at a child’s birthday party, when he managed to snatch some soy ice cream off of my plate. Since then, I’ve given him little bits of cake at special occasions.

A quick note on gagging – it’s common for BLW babies to gag as they learn to manage eating. This is not the same as choking. Babies have a very sensitive gag reflex that kicks in if something too big to swallow goes into the back of their mouths. Hugo only gagged a couple of times but it can be unnerving. It happened once when he was too tired to eat, and once when I gave him an English muffin because it was too doughy and stuck to the roof of his mouth.

It’s been a great experience so far. I love sharing mealtimes with Hugo. It’s a special time when we get to enjoy each other’s company without me having to chase him as he barrels across the room. Hugo is a great eater. I’ve heard that babies are either good eaters or sleepers, and we know who is not a good sleeper. He hasn’t rejected anything outright yet unless it wasn’t prepared in a way that he enjoyed (boiled apples and raw tofu have been thrown overboard one chunk at a time). Whether following BLW helps him to be a less picky eater as he grows up as it’s been suggested, it’s been a lot of fun for  our family. 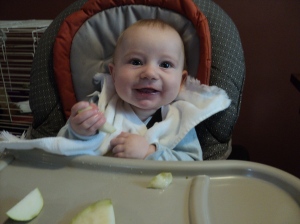 We weren’t in a hurry to introduce solids to Hugo since the American Society of Pediatrics pushed back the recommended age to six months.  I heard the delay was related to statistics on obesity and of course I am in no hurry to wean. However, Hugo appeared very eager to eat food.

I used to have breakfast standing at the kitchen island with Hugo in a sling. I would put one of his toys on the counter in front of him and my bowl of cereal off to the side.  A few weeks ago he succeeded in swiping a handful of rice crispies when I let my guard down. He’s gotten pretty quick about grabbing forbidden objects.

I heard about baby led weaning from a friend around the time Hugo was born. It involves skipping purees and allowing a baby to feed himself. The benefits include a less picky eater later in childhood, no exasperation in trying to cajole baby to eat, and it’s fun for everyone to eat the same food together as a family.

It makes sense to me that if the baby decides when and how much to nurse, he should have the same control over solid foods as he transitions (slowly) from breast milk to solids. One of the mottoes of baby led weaning is “food before one just for fun.” Babies are supposed to get their nutrition from breast milk or formula before age one, so eating should be a fun, exploratory activity.

I ramped up the research as Hugo’s six month birthday approached and bought The Baby Led Weaning Cookbook. We bought a couple of avocados and an organic pear in preparation. Then a few days shy of six months, Hugo grabbed an apple out of my hands and dug in. Yes, we caught it on video. Don’t mind the doleful Civil War documentary in the background.

It was on! I started offering a fruit or vegetable to Hugo once a day. Then I added in a piece of toast or organic brown rice cake. I was shocked when he ate a good deal of avocado then slept three and a half hours in his crib. I thought it was an old wives’ tale that babies slept longer with solid food in their tummies. Unfortunately, that sleep stretch has not been repeated since.

Sometimes he just plays with the food and only eats a little. When we offer something he loves, he’ll eat a lot more. His favorite foods so far are pears and sweet potato fries. Here is a tentative foray into bananas.

It is so much fun to share this experience with Mr. Go, but I wish he weren’t in such a hurry to grow up!

A blogger sharing all her thoughts and feelings regarding motherhood, including the dirty details

The life of PASSION

Miss Maisie and Me

The perils, pitfalls, and joys of (accidental) natural motherhood after 45...

Seeing is forgetting the name of the thing you see

I eat cheese, I run from zombies, and I do therapy

writer on a journey in search of oracles, alchemists and hidden doors to wisdom

Rants and rambles about a mom's life

German in UK with poems, pets and flowers

Godinterest is dedicated to proclaiming Christ and set apart, to save and empower lives.

My bio and personal aspirations:

Future Stella, I love you

Letters to my daughter to be read in 20 years